The following story by Diandra Linnemann won joint 3rd place in the second week of our 2014 Celtx Competition. The theme was Sabbats. 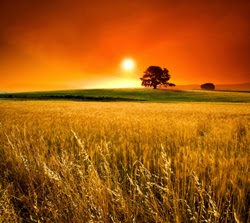 There was nothing to be done about it. The car was dead. And from what they could see, not a soul for miles.

Stella looked out over the land. Only days ago, these fields had obviously been heavy and golden with grain. Now the earth lay dry, covered with yellow stubble, like the cheeks of a blond sleeping giant. Every now and then, an island of wheat stood interwoven with wild plants, cornflowers and bleeding poppy. She had read about it in her books, the old folks sometimes left some of their harvest for the animals. Kind of a modern sacrifice. In the distance she spotted a clump of trees, green and dusty from days of heat and nights without rain.

She heard Kevin slam the hood of the car closed. He knew as much about cars as she knew about brain surgery. “We had best settle down in the car for the night. We could cuddle, you know, to keep warm.” She did not look back at him, but she smiled. He was like a brother for her, an irresponsible, always joking little brother. And she never knew whether he was still flirting with her or not.

The sun, unrelenting during the day, now raced for the horizon. It would be dark in a matter of minutes, and cold would follow in the shadows. With a sigh she turned back to the car. They had sandwiches and a few bottles of lukewarm coke in the trunk, and a night in the car probably would not kill them.

They talked and joked and ate, and when the stars were climbing into the sky Kevin dozed off. Only Stella was not tired. Quietly she got out of the car, wrapping her sweater around her body to keep warm. The night air smelled of summer and dreams and promises, and somewhere beneath there was something... more, like the taste that lingers in your mouth after eating high quality dark chocolate. She saw bats flitting about, and something bigger that might be a bird.

With small, determined steps she crossed the empty fields. The light of the stars was clear and cold. No moon was seen in the sky.

A man was standing between the left-over grain. His face was hidden in the shadows. He was incredibly tall and on his head he wore a crown woven from straw. Stella thought she might be dreaming. She stopped a few arms’ length from him.

“I see your mother has not told you about me”, he stated. His voice was the whisper of summer wind between corn leaves. “You are from ancient blood. My Lady and I have been waiting for you to find you path.”

“I know exactly where I am going”, Stella replied. Or maybe the words were only in her head. It did not matter.

The man in the field held out a hand to her. “I am about to depart to the underworld. All alone. Don’t you think I deserve a kiss?”

“Get yourself drunk at a bar, there should be plenty of kissing for the likes of you.” Stella smiled to take the sting out of her words. “My mother never said a word, but Grandpa told me about you. He brought the memories with him when he crossed the ocean. I never thought he brought his Gods as well.”

“And I know where you are headed. You will return, and it does not matter whether I bend the knee or not.” With that, she stepped forward, closed her eyes and kissed him on the cheek.

He smelled of fresh soil, dark and rich and of decay. “You will follow me”, he whispered. And when she opened her eyes he was gone.

The night was still dark, and far away Stella could see the car. An owl hooted in the distance, twice. A shadow twisted and turned in the seats. Kevin was dreaming.

She threw her head back and drew in the richness of the night. Tomorrow they would reach their town, spend a few days with their parents and then return to their books and studies. Her path lay before her, solid like a bridge made from stone. She knew where she would be in forty years, and long after that.

The night was too beautiful. Stella turned away from the car and started walking towards the trees. Maybe she could still catch up with the crowned guy.

When Kevin woke up in the morning, he knew something was different, but he could not remember what it was. He had been tired, that much he knew, and now he started the car and resumed his trip. He felt strangely alone, and happy all the same. 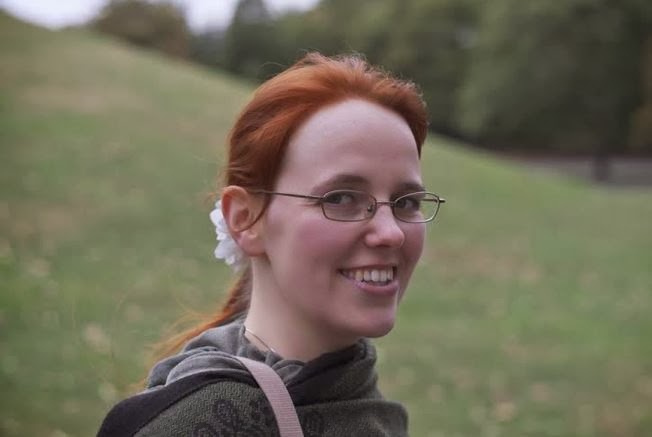 Diandra Linnemann, born in 1982, is a witch, a writer and a translator, currently residing in the former capital of Germany. She likes her coffee and her cats. Among her published stories are The Sacred Dance in Taboo by Ishtar Press (2012), A Night's Work and Bloody Bones in 31 Nights of Halloween by Rainstorm Press, Emerald in Thieves and Scoundrels by Absolute Xpress, and her self-published and translated urban fantasy novel All Souls' Children. Find her here and here, and on Facebook.
at 14:50