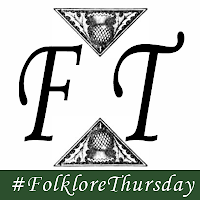 If you're on Twitter, you can't help but notice the hashtag #FolkloreThursday (@FolkloreThurs). It's become something of a phenomenon, even attracting BBC attention. There's now an accompanying website, helping to bring together folklore from around the world. This week, Dee Dee Chainey (@DeeDeeChainey), one of the founding members of #FolkloreThursday, dropped by to answer some questions.

Hi Dee Dee, thanks for joining us. Thursdays are perhaps our favourite day of the week since #FolkloreThursday took off.

For those who don't know, please could you tell us what #FolkloreThursday is and how it came about?

#FolkloreThursday is a weekly hashtag day on Twitter where people can share all things folklore related! Willow and I had been chatting on Twitter for a while, and thought it would be really great if there was a place to go to find out all about folklore. We were already taking part in a lot of the hashtag days, and then the idea came to us that a hashtag day would be a great way to get people together talking about folklore! We planned it for a while, set a date for the launch, and it all went from there!

Why is folklore important in the modern age?

Great question – I really do think folklore is important! I think, in the past, it was a great way to convey social norms and expectations – as well as important lessons – from generation to generation. While many of our social rules today have changed to the ones we see in folklore, narrative folklore really does act as a system of archetypes that give a focus point for us all to reflect on the issues that do still affect us today, particularly through examining the symbols and memes many of us take for granted. Narrative, and other types of folklore, are a great way of connecting to a shared heritage, and an excellent way of learning about cultures: our own and other peoples, allowing us to negotiate ideas, not only about how we’re different, but about how we are all the same; the passing on of traditions and stories are intrinsically human, and something we can all come together to share.

What's been your favourite piece of folklore posted by a participant?

My absolute favourite? Well, that’s a difficult one! I do love ‘body parts’ folklore... so I suppose I have a particular penchant for the Hand of Glory: the ‘guilty’ hand of a hanged murderer that can be lit like a candle, and then be used for all kinds of mischief. Some sources say it will paralyse anyone who sees it, others that it will open a locked door.

We thought it would be great to have a place to gather a lot of the stuff shared on #FolkloreThursday, and have a ‘hub’ for the hashtag that everyone could come to throughout the week. A lot of people said they wished everyday was #FolkloreThursday. I suppose, with the website, it can be!

Does #FolkloreThursday predominantly focus on British folklore, or is it global?

Have you noticed any similarities in folklore around the world?

Definitely! A lot of the stories shared have very similar themes and plots, particularly those from across Europe and Scandinavia. Some folklore that does stand out to me personally is some of the Japanese stuff, the Yōkai for example. It’s so unique... reading a Japanese folktale is like an adventure – you never know where it’s going to take you!

Ooh, great question! I think I’d have to choose the Encantado from the South American folklore. Legend tells that they are spirits that take the form of dolphins from the Amazon River, then take on human form at night, leaving the waters to seduce unsuspecting human women. They sometimes kidnap humans, and can cause illness, or even death... creepy!

Do you have any theories on why #FolkloreThursday has become so incredibly popular? What is it about folklore that attracts people?

I think maybe it’s different for everyone. We see people using folklore in so many ways: academics, writers using it for inspiration, artists, people relating to it as part of their belief system, others engaging just for fun or escapism. I do wonder how much the interest might be in response to the increase in technology in our daily lives, and things like that. Historically, you do see people turn to the past, as well as to myth and story, for a sense of grounding and reassurance at times of political and social instability.

Personally, I think the current political climate and the trend towards globalisation might have something to do with the resurgence in story, but also with reconstituting a sense of identity and heritage for people. From a #FolkloreThursday perspective though, I would say we’re just pleased that people love it as much as we do, and we’re happy they’re engaging, whatever their motivations! We keep saying it, but we firmly believe that folklore belongs to everyone – it’s a treasure trove of information, and really quite magical at the same time – it’s a way of bringing wonder and awe back into everyday life, and it’s important to have that.

Is folklore in danger of dying out?

From what we’ve seen on the hashtag day, I’d definitely say no! It’s amazing how many things are going on around the world using folklore – from books, to films, theatre productions, as well as a host of local community projects working to get people excited about folklore! I think the popularity of folklore and legends must have risen over the last few years. I’m not sure whether books, films and TV shows like Harry Potter, Jonathan Strange & Mr. Norrell, Song of the Sea, and the like, have led to the increased interest or have been made because producers realised it’s popular, but you can certainly see a definite trend. And people have responded to that. Folklore has become something that most people are aware of now, in varying degrees.

What are your hopes for the future of #FolkloreThursday?

At the moment we’re still working on getting the website filled with top-notch folklore articles. After that? Well, you’ll just have to stay tuned and wait and see...

How can people participate?

#FolkloreThursday runs every Thursday on Twitter, from 9am to 8pm British time (with a few short breaks in the middle!). To participate, people just need to post their tweet with the hashtag on the end: that means just type the hashtag symbol followed by the words ‘Folklore’ and ‘Thursday’ with no spaces. The tweet will appear in the hashtag feed publicly and everyone will be able to see your post if they’re following the hashtag!

We do have a detailed guide explaining how to get involved and what to post for #FolkloreThursday.