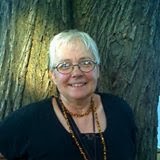 
That’s when I noticed her.  In a town this small, one gets to know everyone, especially on Main Street.  She was a new face, and she did not present a pretty picture.  Young, thin and inadequately dressed for the weather, her face held a haunting desperation, and yet there was something about her that made me take a second look.  She was gone as quickly as she appeared.  I debated going after her, but decided to let it go.  I was sure that I would see her again, and hoped she would find shelter for the night.

In spite of it being early November, the weather did turn snowy by early afternoon.  I knew that customers would be far and few between, so by about three, with all the decorations taken down and packed away, I locked the doors, turned the sign to ‘Closed’, and went back upstairs.  After a hot pot of tea, I decided to do some writing on my own, but instead it turned out to be a day of memories crowding everything else out of my head.  Try as I might to turn these thoughts aside, they overwhelmed me and eventually I gave into them.

At times like these, I always reached for my scrying mirror.  It’s dark surface softened the old look that now stared out at me, so different from what I felt inside.  Lighting a candle and incense, I positioned the mirror just so, where I could see the woman looking back at me.  She smiled her greeting.

“Well, hello there,” she said, “you disappeared so quickly this morning.”

“Right,” the smile was now sardonic, “Of course it did.  So, I take it that this is not an ordinary call?”

“Memories.” I sighed.  “Memories of childhood crowding other things out of my head, so I thought I’d lay them out and we’ll play a game of ‘let’s remember.’”

“For the most part, it’s been a happy childhood…”

She snorted in derision, “More like a schizophrenic one.”

I couldn’t really deny that, and reluctantly nodded in agreement.  “But there were some good times, even you must admit to that.”

“Not that often and never for long, but yes.  What is your favourite memory of that time?”

“My room in that little bungalow,” I responded, “the one where it all started.  And before you say anything, yes, I also must say that it was one of the worse times of my life as well.”

“Okay, let’s go back to the room – primrose yellow walls…”

“The plain little back yard so ordinary by day…”

“But so magical by night!”

I laughed “It was that indeed.  I didn’t really know what I was seeing, only that I saw something amazing.  It was only much later in life that I realized I was watching fairies winking in and out of my sight”

“How about the day your mom and dad finally caught you slipping out the window to sit on the basement slanted door?”  We both laughed.

“Yes, that was quite something.  I had to think fast and tell them that I dropped a book.  It’s a good thing the Moon was full and I actually did drop the book when I heard them come in! I loved doing that, just sitting on that door watching the nature spirits dance.  Strange how even at that time I knew never to talk about these experiences with anyone.”

“You realize all you may have been seeing were fireflies.”

“Shut your mouth, woman!  You know as well as I do that fireflies looked and felt completely different.  Not that I never saw them, of course I did, but…”

“Just teasing you, my dear,” the reflection said gently.  “But I’m curious, what made you trip down memory lane today?”

I sighed and glanced at the window.  It was dark now, but the newly falling snow lightened the gloom.  “It was something I saw earlier – a young girl passed by the store.  There was something about her that just caught my attention.”

“Yes, I know.  I was there too.  Young, pale, skinny, huddling in a coat that was more suitable for a cool summer night than this snow we’re having.  Feeling guilty?”

“No, well, maybe just a bit.  I really should have asked her to come in.”

“But you didn’t, and that set you off on this nostalgic trip.  You know you’ll see her again, and soon.”

“Yes, I know that, and I only hope it will be with her alive, not frozen solid under a blanket of this snow.”

“Anything else you want to talk about regarding your childhood?  Resentment of how you were treated, the confusion and panic that would grip you hearing your parents fight?”

This was a serious question, and one that always sent a spasm of fear through me, even after all these long years.  “No, not yet, but soon,” I promised.


She was huddled in the corner where the wind cut the least.  She managed to get a blanket from somewhere to wrap around herself and a woolen hat.  It must have been enough to make her fall asleep.  I stopped the shoveling, and gazed at her, clutching my scarf more closely around my throat.  That movement woke her up.  She looked startled, like a cornered animal.

“It’s much warmer inside,” I said quietly.  “Why don’t you come in and I’ll make us some tea. That would be nice, won’t it?”

She said nothing, just shrank back against the wall.  Her eyes, I could see now, were dark blue.  They were beautiful, or would have been if it wasn’t for the red-rimmed eye-lids, dry from constant crying.  My heart melted at the sight, but I hardened my voice.  “Come!  You’re keeping this old woman out in the cold, and that’s totally disrespectful.  Let’s go.”

Her gaze dropped and she slowly got up, and followed me into the store.  I motioned to the couch, and got a pillow for her.  “I’ll put some water on for tea, and I know I have some sandwiches here too.”

She tried to be polite, mumbled a faint ‘thank you’, but completely threw away all civility when the food was placed before her.  I nursed a mug of tea as I watched her.  She polished off two full egg-salad sandwiches and a Danish, along with two large mugs of tea, before finally sitting back and looking at me.

“Thank you,” she said more firmly.  “I – I guess I was hungrier than I realized.”

“I’m Beatrix,” I said holding out my hand, “and this is my little establishment, Bea’s Book Nook.  I saw you briefly yesterday, but you disappeared before I could call you.  Looks like you have quite a story behind you already.”

She dropped her gaze and said nothing.  “Not even a name?” I prompted.

“I think, Ronnie, it’s time for you to have a bit of a nap.  We can talk later, okay?” With the pillow beneath her head, a blanket over her, this little waif slipped off to sleep almost immediately.  The woolen cap slipped off revealing short spiky hair that was a dirty blond – dirty, in bad need of washing, as were the clothes she was wearing and the blanket she brought in.  I quickly threw it out and covered her with one of my own comforters.