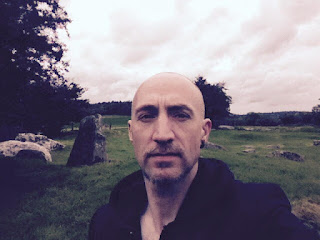 David Halpin is a writer originally from Dublin, now living in Carlow. He presents the YouTube series The Occult Book Review and regularly writes articled on esoteric history, Gnosticism and mythology for publications including Ancient Origins, The Wild Hunt and Occultum. He has also appeared as a guest speaker at the Irish Festival of Magic and Spirituality, Féile Draíochta. His children’s book, The Girl Who Spoke to the Wind, has been optioned for film by Irish director Maurice Joyce. You can find him on Facebook and Twitter.

The Witch is Dead, Long Live the Witch
David Halpin

She was the gatekeeper at the edge of the world. The Final human hymn before all fell to wind and shadow and the strange creaking of stars. She was a pagan chorus. An older song. - The Good People by Hannah Kent.

During a recent conversation it was suggested to me by a prominent pagan spokesperson that in light of human carelessness and recent American environmental decisions, that perhaps it would be best for the planet if human beings destroyed themselves and allowed the earth to evolve without us.
While one part of me understood what this person meant: the overwhelming fatalistic dismay at what our world is becoming, another part was disturbed at what I was hearing. I felt compelled to ask whether or not everyone had a collective responsibility to the next generation, even if they didn’t have children themselves. As a parent, I want to believe that human beings have an instinctual compassion that extends not just to their own families but to all human beings.
The response from this person was that even if the world was destroyed, everything is connected and so ultimately all would be well and destruction would not be such a bad thing.

For days after I tried to reconcile this person’s outlook to what I understood paganism to mean. I know that the current rise of eco-scepticism and the influence of the fossil fuel industries can be disheartening, for example. I also know, however, that there is a tremendous effort by pagans and non-pagans alike to bring attention to the pollution of planet. Surely this should motivate and engage us, another part of me argued, not dishearten and create a spiralling sense of complacency.
A bigger question for me was the ethical and moral responsibility that comes with being a pagan and witch in the first place. Don’t we believe that all life is part of something bigger than ourselves and that we are not only connected to that which we know and love but also those we do not know but still have a responsibility to help?
As the father of two daughters, experiencing an attitude that can lethargically accept the extinction of millions of children as being inevitable and not worth fighting for seems just as psychotic as the actions and policy decisions that have created our catastrophic environmental predicament in the first place.
In fact, as a pagan, rightly or wrongly, I expect my community to feel more empathy and connection with life outside of our immediate circle and personal environment. Surprisingly, as I sought out opposing viewpoints and a more hopeful and inclusive response from pagan influencers and speakers, I instead began to notice a very insular outlook. I began to see a trend which was the opposite of everything I believed paganism to represent.

In an attempt to dispel my growing fears, I began to examine the most immediate window into the current state of witchcraft and paganism, namely the various social media platforms I was connected to. I felt that I would be able to gauge, through observation, the contemporary and evolving attitudes and interpretations of paganism. I believed I could find others, like myself, who did not want to walk away from the future, but to protect it.
What I found instead were pages and pages of ‘selfies’, blogs focusing on ‘Witch’ apparel and a surprising lack of differentiation between being a pagan as opposed to being seen to be a pagan. I also discovered a trench mentality which seemed to redefine paganism to the extent that it was normal to have little to no connection with the environment or communities outside of one particular tribe or culture. There seemed to be no awareness that by creating a ‘new’ witchcraft imbedded in monoculture and superficial symbolism there was a cutting off from the roots and actual practice of witchcraft and paganism in the first place.
I was reminded of what Peter Grey wrote about rebellion as a marketing device in his ground-breaking work, Lucifer: Princeps:

It is part of a deliberate strategy to create consumers, subverting the drives of social and sexual dissatisfaction by channelling them into brand loyalty and consumption, rather than questioning the values of the corporate state. It avoids the crisis of initiation to keep the population dependent and uncertain in an extended ‘kidulthood’, whilst simultaneously breaking social cohesion in favour of the individual as production/ consumption unit rather than as sovereign.

This extended ‘kidulthood’, as Grey writes, is more devastating in consequence than might first seem. By attaching such importance to youth-image and clinging to one stage only in the cycle of life we are destabilising the very wheel itself. Renewal comes only from the passing of the old. Refusing to acknowledge the wisdom and further initiations which come with later life also abdicates the responsibility to the future and from this an attitude of apathy and selfishness is born.

Today, there is often a knee-jerk reaction to a non-indigenous pagan of one particular culture pointing out commonalities with another, which is a shame, considering the common roots of archetypes once we go back far enough in history and time. The fear of being seen to ‘commit appropriation’ might account for some of this, of course.
But there is another effect when we are bound by psychological and cultural borders and when we are pressured to keep only to our own gods and goddess forms, and this is the growing racism within contemporary paganism and witchcraft. It is ironic that those most willing to (with usually good intentions) call out appropriation might also be contributing to the resulting insular and xenophobic conditioning that can often follow.
Paganism has passed through many crossroads. Moving further into the 21st century we are perhaps approaching another which might have the greatest consequences of all. Never in human history has it been so easy to destroy ourselves and yet never in history have there been so many available avenues of escapism in order to avoid facing up to this.

The path we end up taking will be directly influenced by how many pagans and witches begin to take responsibility for an integrated future. The sooner we understand that this involves more than our own life-spans and more than our own specific cultures the better chance of survival we will give the next generation.
at 15:26