Celtx Fiction Winner: I Once Was King

The following story by Lidia Adaman Tremblay won joint 1st place in the second week of our 2014 Celtx Competition. The theme was Sabbats. 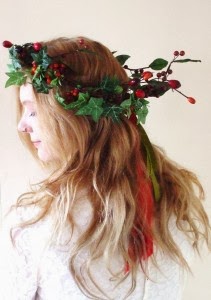 I Once Was King by Lidia Adaman Tremblay

I once was King, that is a fact, for a King I was upon Mayday eve. A little bean decided my fate, that bean being hidden in a very delicious dish of blueberry crumble. The dish was upon the table laid out with a great feast, so great the very table groaned beneath the crocks and pots, and plates and bowls of yummy foods upon it!Also hidden in that dish was even a smaller pea.

A pea for the Queen
A bean for the King
And so the fates would decide.

Mary found the pea, and became May Queen. She shrieked her joy for all to hear! But when the bean found me, she shrieked all the louder, and immediately abdicated her throne.

“I will not be Queen if she is King”, she pronounced.

A new queen had to be found, and while the hunt went on, I sat down. I sat down upon a throne-like chair and surveyed my Kingdom and all the people therein.

“Are you left alone?” Lord Glen inquired. This Lord was a bard, skilled in voice and verse, drum and step of dance.

“No indeed”, I responded royally. “I sit here upon my throne-like chair and survey my Kingdom”.

“How is it that you will be King?” asked another subject, “for being a woman, I hear tell it is hard to be King.”

But I knew what I would answer. “I shall get in touch with my masculine self”, said I, and immediately began to eat upon a banana – a very masculine fruit indeed!

Thus I surveyed my kingdom from my throne, and greeted the subjects who sought audience with me, their King. Tributes of love, and hearty congratulations were heaped unto me, but all looked at the empty throne beside me, the throne upon which the May Queen remained absent. In spite of the joy, an undercurrent of sorrow was felt.

But joy and gladness were also strong. With ready hands and willing hearts, the folk did work, and the Maypole was erected yonder, and all the subjects gathered around it, but still, alas, no May Queen was found. The ribbons were also hung; ah, so brightly they hung, from that upright Maypole. In blue, and green and purple and gold, in red and silver did they descend and flutter in the warm evening breeze. The children laughed and clapped their hands to see such wonder in their land! And the gentle folk, my subjects, arrayed themselves about the Maypole, but still, no May Queen was to be found.

And then a beauteous Maiden stepped forth, so radiantly stepped forth and proclaimed, “I shall be proud to be your May Queen.”

Lady Penny did then did become our Queen, and was brought before the populace thronged by her feet. With grace and beauty, she did us all proud and gave honour with her proclamation. She who would have been Queen did also do homage, for Mary was of gentle heart and spirit.

Great rejoicing then abounded throughout the Kingdom!! The May Queen was crowned with flowers upon her head. The May King was crowned with ivy upon his (her!) head. And together they led the rejoicing gentles about the mighty Maypole - weaving man and woman, weaving ribbon upon ribbon, dancing over and under until all the ribbons wove themselves tightly about that Mighty Maypole!

Ah such joy and laughter was not to be contained, but carried forth unto more dancing, but now about a brightly lit Sacred Fire. The King and Queen of May stood before the Sacred Fire and did it homage as the multitudes began jumping over the Sacred Fire, leaping high, in single strides, the happy couples they did jump, and so did the Kingdom of the May Queen and King was rid of all that was negative and harmful.

Thus now ends the story of the time when Penny was Queen and I was King. And all because of a little bean.

Yes, it was very, very good to be Beltane King!! 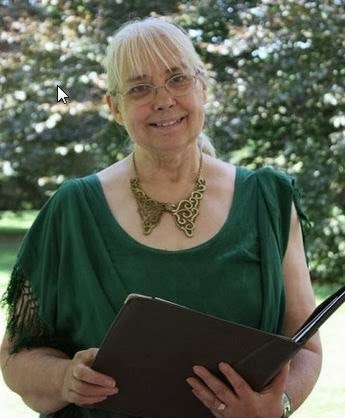 Since retiring, Lidia Adaman Tremblay has been able to devote her time to writing. She has also been a costume designer, pianist, office administrator, graphic designer, and background actor in movies. She believes that being a mother and grandmother does wonders to stimulate her creative processes, as well as being a 2nd degree Alexandrian High Priestess, deeply involved in The Red Tent Movement for women in Canada. She has written and self-published several books, both fiction and non-fiction. You can fine her on Facebook, on Twitter, on YouTube and via her online store.
at 08:00