The following story by Lucy Drake won joint 2nd place in the second week of our 2014 Celtx Competition. The theme was Sabbats. 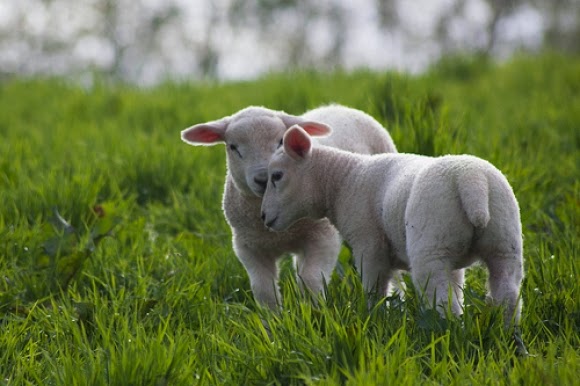 The Lambing by Lucy Drake

The stinging sleet was blowing sideways. It stung the face and chilled the fingers to the bone. The sky was February grey. In the distance the she could hear the ewe. It was labouring loudly. Tiny white feet were already showing. Wiping the wet from her face she walked slowly towards the ewe. Distracted and upset the ewe barely notice her presence. She ran her hand over the slick sweetly pungent wool. The ewe calmed some. Just having someone there, sending the message with her touch It will be alright, you are not alone was often enough for some frightened new mothers. The sheep shuddered and a nose appeared. The ewe panted more heavily and the head was almost out. Speaking softly old words that had no meaning but meant everything , the woman knelt one knee onto the soft wet grass. Then in one swift motion the little grey lamb landed heavily on the grass. The woman didn’t pick it up but waited. It wasn’t moving, no breath just yet. The ewe hadn’t moved. It still heaved and sighed. More feet started to show. The woman sighed. She began to rub the lamb on the ground. Her numb hands becoming slick with warm wet life and blood. The lamb shivered. She tried to make him stand but he couldn’t even open his eyes. Taking off her scarf she wrapped the limp body and placed him inside her coat. The next lamb had turned quickly and was born more quickly. Just as grey and lifeless she waited for the ewe to turn, and lick them into life. She didn’t. All the afterbirth came quickly too. It was clean and had no infection. The ewe turned and looked at the grey wet thing on the ground. The woman rubbed the afterbirth on the ewe’s nose. She snorted and turned away.

She picked up the other lifeless grey body and placed it inside her coat. She turned, walking into the bitter wind towards the dark grey smudge in the distance. The pungent smell began to rise from the bodies inside her coat. Singing old lullabies softly under her breath she put her numb feet on after the other until she reached her stone steps. As she opened the door a waves of warmth and silence embraced her. The wind no longer singing in her ears her own voice singing sounded strange to her. The oven was still warm from the wood she had placed carefully placed before she had gone outside. The old applewood made the room smell sweet. The little bodies she placed on an old towel and she wrapped them together. She placed them into the oven leaving the door open. She took off her coat and put the kettle on. When her fingers began to feel fully she found a small stump of a candle in the draw by the sink. She lit it with a match from a large, scruffy box from the same draw. The room was then filled with light and dancing shadows. She placed the candle on small saucer that had long since lost it’s cup. The slick from her hands was drying but she smeared what she could in a circle around the lip of the saucer and then washed her hands in the sink. The kettle began to whistle starting her back to the room. She dried her hands and made herself tea. She moved back to the oven and waited. The tea was strong and sweet and warmed all the way down her throat. A shadow came to the door. An ancient dog stood there, his tail thumping against the door frame. He sniffed and groaned and he came and lay by the open oven door. Suddenly the lambs began to cry. Their tiny voices urgent and insistent. The woman smiled and reached into the oven and took out the grey twin lambs. The old dog wrapped his body around them and licked them clean. The woman found two bottles and made up some milk. Kneeling again she feed the lambs together, their tails wagging excitedly as they butted to get more milk, though it didn’t come any faster. When they were feed she found an old chair and settled down, boots still on and just rested her eyes. She woke to the smell of cooking.

“Can you spare sometime today to go to the stone?”

He nodded and kissed the top of her head.

At the standing stone the wind still whipped wickedly but the sleet was holding off. Nearby the woman and man buried the bundle full of gifts carefully saying little until they were done. Stamping their feet they chatted about what was to come over the next week and headed back to the warmth of the kitchen.

This winner has not submitted a biography.
at 08:00